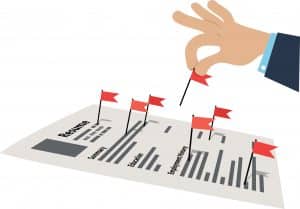 Identifying job candidates who are likely to have performance or conduct issues “on the job” has been a key part of PACE’s screening process since day one.  Of the 15 candidates we might review for any job, eliminating the 4-5 candidates from that list that our clients shouldn’t hire is a big part of what we do – perhaps the most important thing we do.

A BIG PART of an effective screening process is to find the “red flags”, research their validity, and make sure the final hiring decision has id’d all known risks of a hiring mistake.

Only a few RED FLAGS are automatic disqualifiers.  Most require more research and discovery.

No matter how tempting it is to overlook some of the reddish or pinkish flags that pop up with candidates in a tight labor market, our research often ends up mixed.  Some red flags represent  so much risk we wouldn’t want our client’s to “take the chance”.  Other times we uncover a level of risk a client might want to take because it is offset by high levels of high demand skills or work experiences.     Some red flags are simply the signs of poor interviewing etiquette which may or may not be job relevant.

Knowing the difference is what matters!

Here’s TWELVE RED FLAGS we think every Hiring Manager should pay attention to….

….always signal the need for more discovery. For us, gaps are “pink” flags meaning        we need to either get rid of them altogether or turn them red.

If they were having trouble finding a job, find out why.    Does what are describing make sense or were they just optimizing their access to unemployment benefits?  Were the gaps created by their decision to take a job that they don’t want to disclose?

Yes, there is an investigator element in every skilled interviewer.    Look for discrepancies in what is being reported, what is on the resume, what you see on their Linked In profile, and ultimately what their reference reports.   Discrepancies in dates, times, or content need to be confronted to find out if there is something that the candidate doesn’t want to reveal, or an overall loose relationship with the truth.  Either quality is likely to show up on the job, once hired.

….is no longer the bright red flag it once was, but it is definitely an issue that needs to be researched.  Any resume that shows a pattern of changing jobs every 1 or 2 years – without obvious signs of progression – needs additional discovery.   In some cases a job hopper is someone who simply hasn’t yet landed on what they want to do; in other cases it is a sign that as soon as “things get tough” in a job, they leave.

Job Hopper resumes are much more common place than they once were – largely because of the ease with which employees can change jobs.  Job changes are often precipitated by  changes in a company’s business model or new ownership – events that are far more prevalent today than they were just 10 years ago.   Finding out why a candidate has a pattern of only short-term jobs is what needs to be explored.  us to our fifth, red flag, which is about the trends you see in ….

Whether they happen in the interview or in the resume, candidates who exaggerate their qualifications, their role in a particular achievement, even their job title or scope of work,  need a second look.  While “rounding the edges” and “harmless  embellishments” appear to be the norm, purposeful deception may be underscoring a personality issue that will show up on the job in a variety of ways.

Taking the time to uncover if a candidate is simply presenting themselves in the “best possible light”  OR purposefully misleading  who they are and what they can do once hired, is time well spent.  (Stay tuned for a blog dedicated to spotting exaggerations and lies.  It’s both a skill and an art that all interviewers need to master)

Candidates should come to an interview prepared to ask questions – particularly on things that come up in the interview.   Candidates without questions are likely candidates who haven’t been engaged by the interview process (why?) or lack interest in the job.  It may also indicate they don’t have the depth of knowledge or experience they need to do the job, and simply don’t want you to “go there.”

Most candidates know not to bash a former employer, but some simply can’t help themselves.  It is a lifelong MO that yes, will be repeated in your work environment.

“I know I shouldn’t say this, but I know this particular boss was very difficult to work for and had a lot of turnover.  I think I was just the “next to go.”

A better answer “ If I had this situation to do over again, I would have done a better job of getting to know my boss and what they expected of me.  I now realize I shouldn’t have been listening to my coworker s about issues with the boss that were very different than mine.”

If the candidate can articulate what “they learned” from a difficult situation, the red flag might turn pink, but it’s still a flag requiring more discovery.   The habit of “blaming others”  rather than holding ourselves accountable, is typically NOT a onetime occurrence

Again, someone who has been terminated from a job, is a flag, not a disqualification.  You need to know more.  Why were they terminated?  What did they learn?  How motivated are they to change whatever they need to change in their next role?  For some people, being terminated is the best thing that could have happened in their career – the wakeup call they needed  to make them an A+ performer for their next employer.

Failure to follow the steps in your hiring process –  not completing an application, not following through on “next steps”, ghosting at some points in the process – are all signs that the candidate either can’t follow direction or is less than interested in pursuing a job with you – or any employer for that matter.

“I didn’t receive your  application this morning.  Are you no longer interested in pursuing this job?”

Even in today’s socially “woke” society,  there are a variety of issues that can come up in an interview that may or may not be important depending on the type of job you are trying to fill and the importance of certain social behaviors on job performance.

We’ve seen them all….

While social etiquette issues are often used by employers as “reasons not to hire” because they are simple things that can be used to explain why a candidate wasn’t hired….they aren’t always good reasons not to consider an otherwise very talented candidate.

While we encourage our clients to notice a candidate’s behavior in an interview we also ask them to make sure that the issues they see are relevant to job performance.  Some of the most talented candidates we represent are overly nervous in an interview and will express that nervousness by avoiding eye contact or fidgeting – behaviors that don’t show up on the job.  Reason for disqualification?  We don’t think so.

PACE Staffing Network is one of the Puget Sound’s premier staffing /recruiting agencies and has been helping Northwest  employers find and hire employees based on the “right fit” for over 40 years.

A  3 time winner of the coveted “Best in Staffing” designation , PACE is ranked in the top 2% of staffing agencies nationwide based on annual surveys of customer satisfaction.

To learn more about how partnering with PACE will make a difference to how you find and hire employees,  contact us at 425-637-3312 or e mail our Partner Solutions  team  at partnerservices@pacestaffing.com.